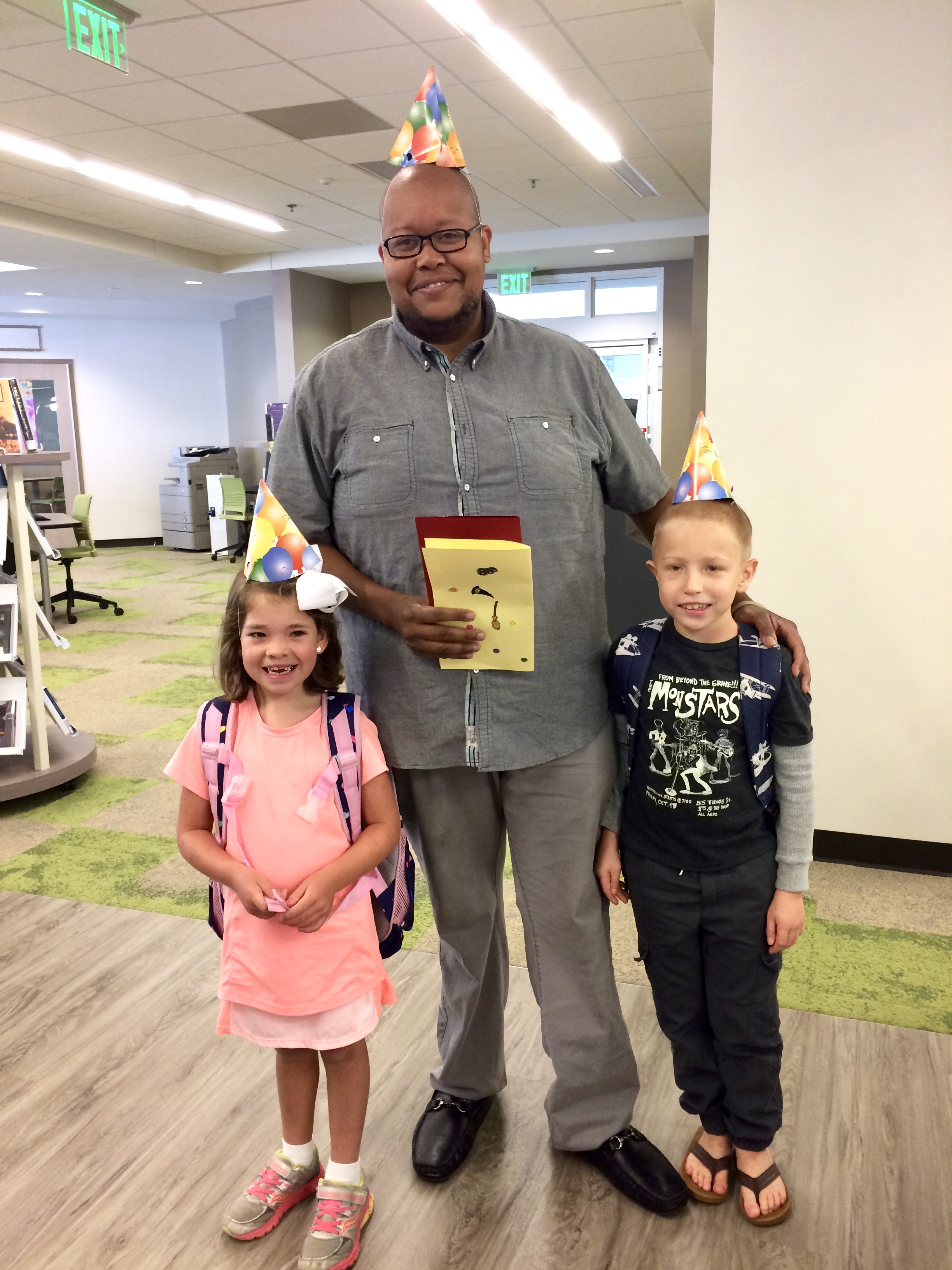 In our community helpers post we mentioned how Wyatt made a buddy at the library. Mr. Jeffrey is an assistant librarian and often helps Wyatt find books, reinforce library rules as well as offer an opportunity for Wyatt to work on his pragmatic speech.

AC, who just joined Cornerstone Prep School, had not yet had the opportunity to meet Mr. Jeffrey until Monday when they went to the library.  During introductions and conversation they discovered that October 3rd is his birthday!

The teachers and the children wanted to do something special for him so they constructed birthday cards using stickers that allowed the children to work on handwriting, visual spacing and fine motor skills (peeling and placing stickers). 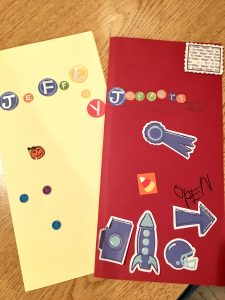 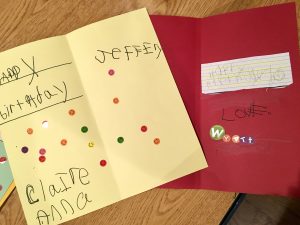 On Tuesday the children came upstairs to the big kitchen to bake cookies for Mr. Jeffrey! They were super excited about this activity. I picked a one bowl recipe that would be fairly easy for the kids to make; my go-to gluten free & vegan chocolate chip cookies. Earlier in the week the children made a simple visual of the steps and ingredients required to make the cookies.  They used the visual to guide them through the process.

First they learned how to make a flax egg. Mix  2 1/2 TBS of water with 1 TBS of ground flaxseed. Then set aside for approximately five minutes while you work on the other steps. This gives the flax time to absorb the water creating a gooey congealed substance which acts as a binder. No egg necessary!

Next came the butter. We use a vegan butter called Earth Balance.

The children worked as a team; taking turns mixing and measuring. They also displayed politeness, saying excuse me when one needed to get on the stool to add ingredients to the bowl.

In went the sugars, flax egg, baking soda, salt and then the flours that they measured out previously. Watching the children work on this activity made me realize how much we take for granted all the motor planing  involved in measuring and pouring the ingredients into the mixer.

Next the chocolate chips….uh oh!

When we went to add the chocolate chips – there were none! We have a pretty good idea of who ate them (Wyatt’s Daddy is quite the chocoholic)! After searching through the pantry we located some Justin’s mini peanut butter cups and some Lake Champlain dark chocolate gold pieces which the kids had to unwrap. They had a brief lesson on knives and then got to work cutting up peanut butter cups with assistance. We pulled out a meat cleaver to break up the chocolate gold coins into chunks and then they mixed it all into the batter. WOW! We decided it was a good thing Mr. T ate all the chocolate chips because there was a lot of fine motor work and motor planning involved in our substitutions (and Mr. T said these were the best cookies we’ve ever made)!

Time to bake the cookies! We covered baking sheets with parchment paper and the children scooped out the cookie dough with a cookie dough scoop that requires them to squeeze the handle to release the dough onto the paper. A lot of hand strength and motor planning was involved in this activity and both children were quite exhausted after they each completed a sheet. Once they were done making their cookies they had to count how many cookies were on the sheet.

I baked the cookies and boxed them up with a nice bow while the children went back to the school room to work on academics until it was library time.

When they arrived at the library with the cookies they also donned birthday hats and even had a birthday balloon. All the librarians smiled as the children located Mr. Jeffrey and gave him the cookies, cards and balloons and sang him Happy Birthday. He was so over joyed he even got a little teary eyed. “You made my day!” he said.  They shared cookies (luckily Mr. Jeffrey LOVES peanut butter!) and chatted a little before the children went off to find new library books. The children felt really good about making someone happy and being able to share in that person’s joy. 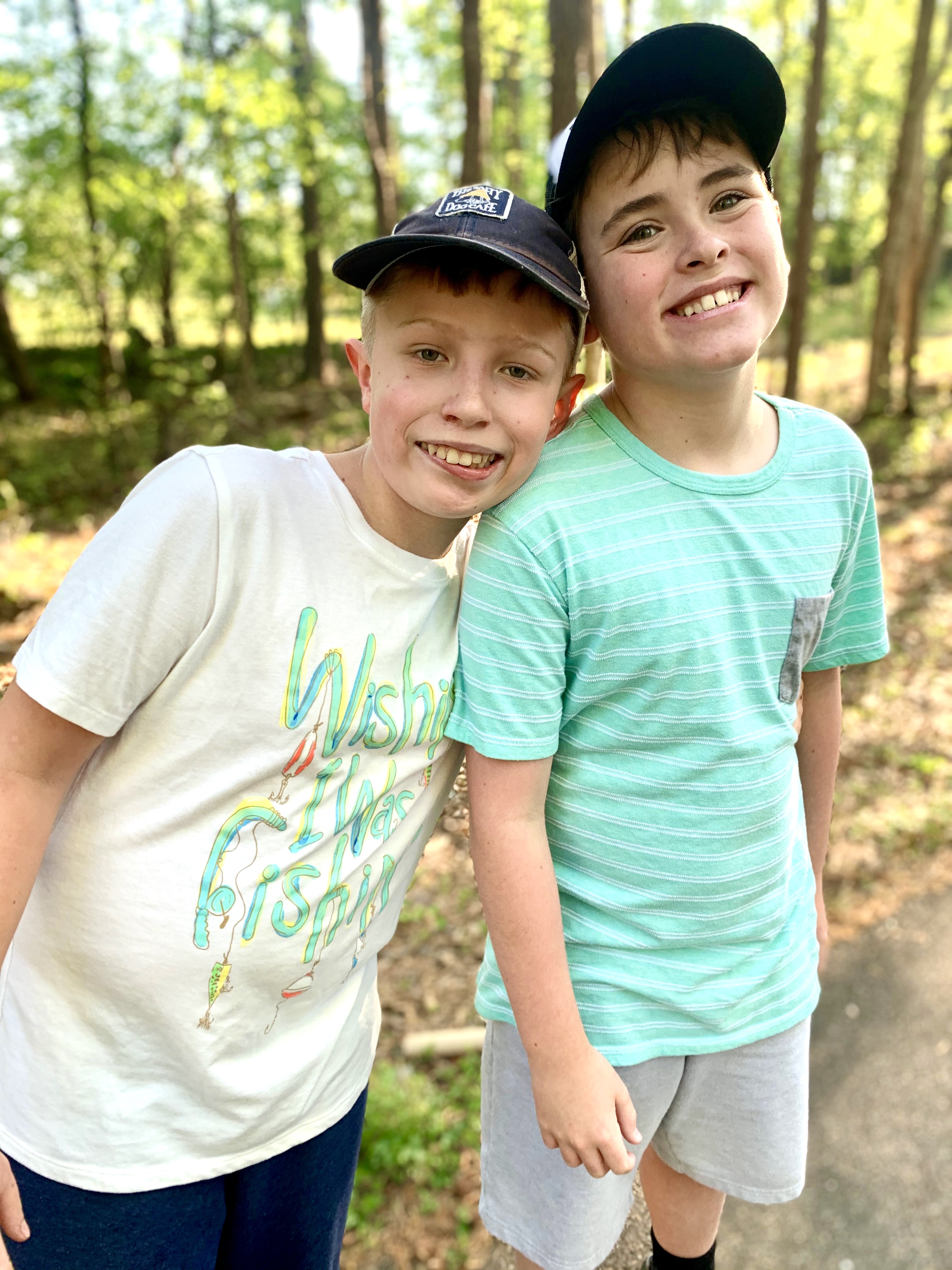 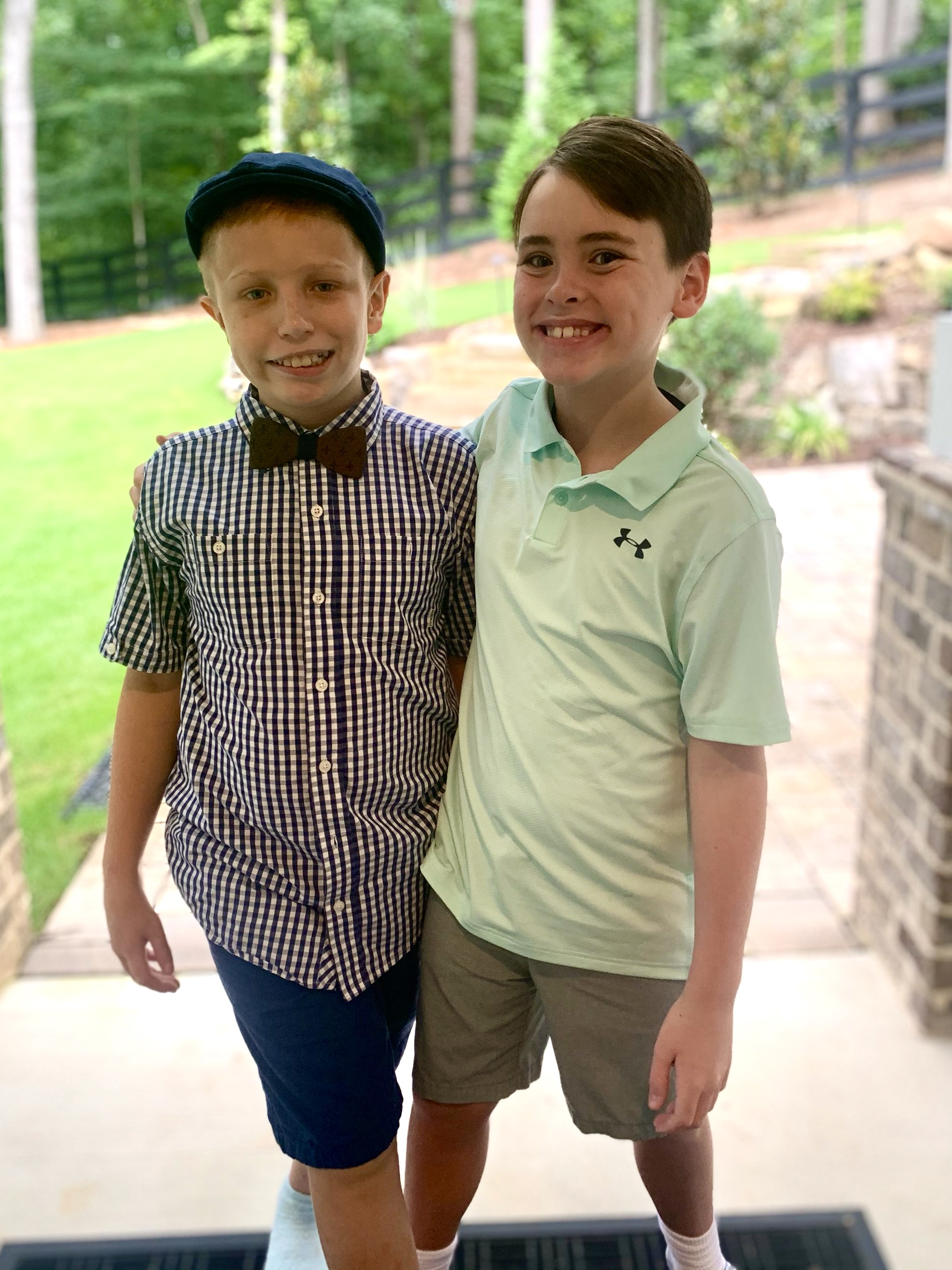 First Day of IN PERSON school!